Staking coins: What is staking, and how does it work? 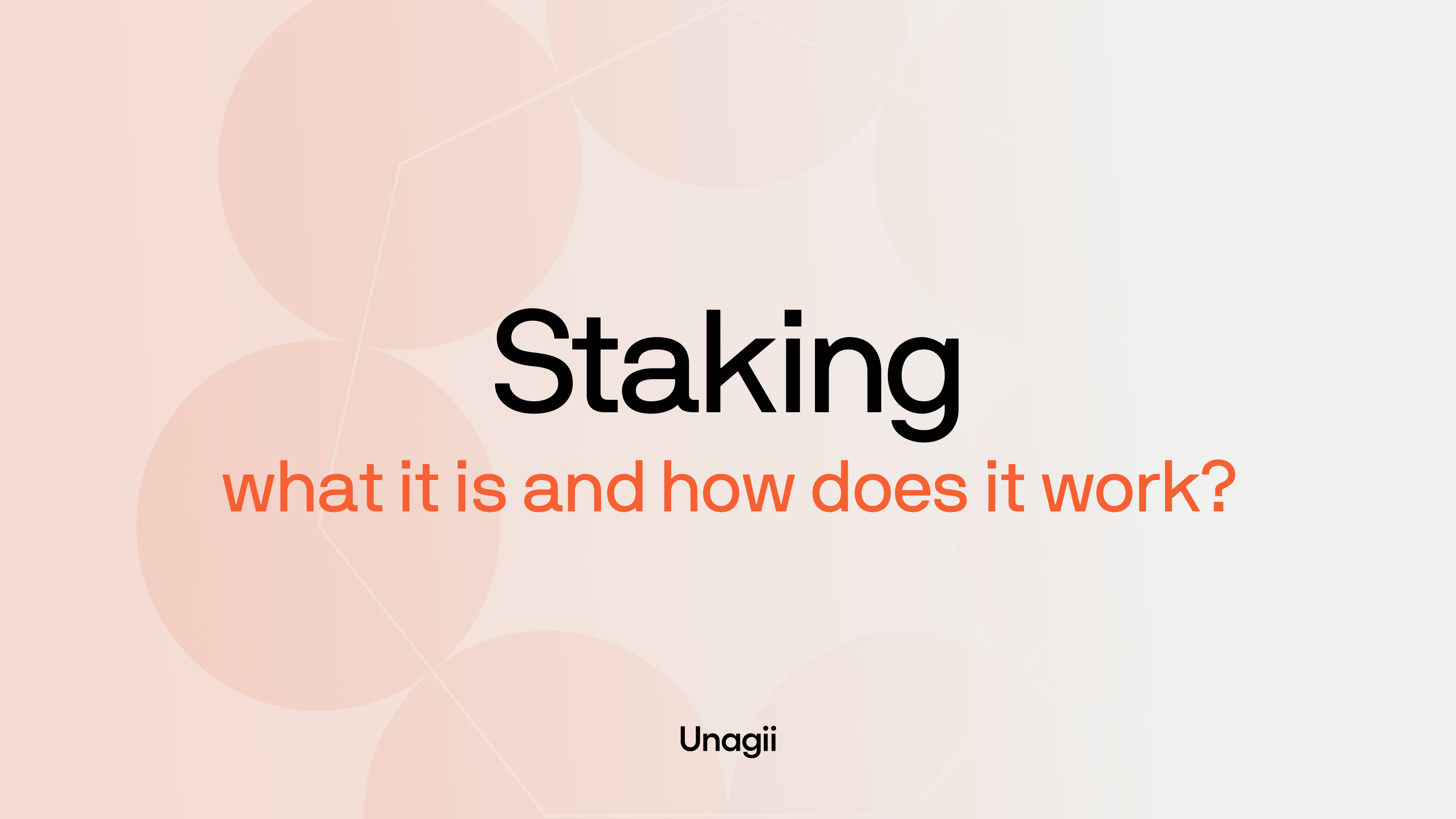 Whether you're using a centralized platform or a decentralized exchange, one of the most popular ways to earn passive income is by staking tokens. Even though staking has only recently gained traction in the crypto market, the technology behind it has been around for nearly a decade.

But even if you are staking your cryptocurrency, you may not entirely understand what it is or how it works. It's just a way to make a little extra money, right? If that sounds like you or you want to learn more about staking in general, keep reading.

With Proof-of-Work, miners compete against one another to solve a complex consensus algorithm. Whoever solves the puzzle first earns the right to add a new block to the network's blockchain. Thus, PoW is a robust process used to ensure decentralization is maintained. Unfortunately, using this type of consensus requires a lot of arbitrary computing power.

The algorithm the miners attempt to solve serves no purpose other than to keep the network itself safe and secure. Of course, the argument could be made that the security is worth it. However, many don't agree and prefer to use a method that doesn't require as much electricity or computational power.

Some of the most well-known Proof-of-Work projects include Bitcoin (BTC), Litecoin (LTC), Dash (DASH), and Monero (XMR).

This is where Proof of Stake comes into play. With PoS, participants lock their digital assets onto the network. At random intervals, the protocol will randomly select one of them, giving them the right to validate the next block on the chain. Many PoS networks give a higher probability of being chosen to validators with more coins locked in the platform.

As a result, validating a new block isn't determined based on who solves an algorithm first. It's based on how many staking assets they hold. Some argue that blockchains using PoS as a consensus mechanism have a greater degree of scalability. This is why many cryptocurrencies — like Ethereum (ETH) — have moved or are in the process of moving to this type of validation method.

A few of the more popular Proof-of-Stake cryptocurrencies include Algorand (ALGO), Cosmos (ATOM), and Stellar (XLM).

Delegated Proof-of-Stake is an alternative to PoS that was created in 2014. With DPoS, participants use their crypto assets as votes. However, in this version, your voting power is directly correlated to the number of tokens you hold. These votes are used to elect delegates, which are then given the power to manage the network on the voters' behalf.

The advantage of the DPoS model is that fewer nodes are needed to achieve consensus. This is important because more nodes typically mean poorer network performance. On the other hand, fewer nodes mean the network has a lower degree of decentralization. The project is using a select, small group of validators.

Even though it’s not as widely used as its Proof-of-Stake counterpart, there are plenty of projects that use the dPoS consensus mechanism. These include Tezos (XTZ), Tron (TRX), EOS (EOS), and Terra (LUNA).

How does staking rewards work?

The reality is that staking works differently depending on the cryptocurrency you're using. For example, blockchain networks use different methods to determine who gets to validate the next block and how to calculate staking rewards. Some depend on how many tokens you're staking. Some use tenure to determine who gets the next block rewards. And some simply use a fixed percentage.

These rewards are disbursed among network participants as compensation for locking their digital assets on the blockchain. Additionally, it's a method used to incentivize users to continue investing in the network while simultaneously attracting new participants. A network's staking rewards should be public information, so check out the reward schedule before you decide to lock up your crypto.

Another way to stake your digital assets is through a staking pool. Staking pools are when a group of participants merges their resources together to improve their chances of being selected as validators. These pools consolidate their staking power, then distribute the rewards proportionately according to each person's contributions.

Joining a staking pool is a great way to gain access to a project that has high entry requirements. For example, some networks require thousands of tokens just to use their staking services. However, if you're part of a pool, you can be part of the network without a huge investment on your part.

Where to stake cryptocurrency?

There are several ways to stake cryptocurrency in today's crypto market. Ultimately, you'll have to decide which one makes sense for you, but let's take a look at some of the more popular platforms used for staking.

There are plenty of exchanges to choose from if you want to stake crypto. The following exchanges are just a few of the more popular platforms that offer staking options:

Touted as one of the best crypto exchanges for beginners, Coinbase also lets you stake popular cryptocurrencies. These include listings such as Algorand (ALGO), Tezos (XTZ), and Cosmos (ATOM). Even though the rewards aren't as high as they are on other exchanges, Coinbase is a great place for those new to staking.

Binance is the biggest crypto exchange in the market, which is why many investors prefer to use it for staking. The Binance ecosystem is expansive, so there is no shortage of staking coins available to its users. Digital assets available to stake include EOS (EOS), VeChain (VET), and Neo (NEO).

Kraken has more than $1 billion staked on its platform. Kraken is a great option if you're familiar with staking coins. Polkadot (DOT), Ethereum 2 (ETH2), and Tezos (XTZ) are just a few of the staking coins on the Kraken platform.

There are also wallets that let users stake coins. Some are online wallets, while others are desktop wallets. No matter which type you prefer, there are plenty of choices in the crypto market. Examples of staking wallets include the following:

With Atomic’s desktop or mobile wallet, you can stake your digital assets without the need for an exchange. Users get their rewards right from the validators and can stake cryptocurrencies such as Tron (TRX), VeChain (VET), Komodo (KMD), and others.

Exodus is a desktop wallet that's ideal for users who want to stake more than one crypto at a time. This multicurrency wallet lets users stake digital assets like Ontology (ONT), Cosmos (ATOM), Algorand (ALGO), and others.

Supported by Binance, Trust Wallet is a versatile private wallet that's great for staking coins. You can earn passive income with this wallet by staking Tron (TRX), VeChain (VET), Tezos (XTZ), and many other digital assets.

Staking as a Service

Another way you can stake your favorite cryptocurrencies is through a Staking-as-a-Service platform. These services are designed for less technical investors or those who simply don’t have time to take part in the staking process. However, keep in mind, these platforms do charge a small fee to stake coins for you.

Here are a few options to consider if you think Staking as a Service might be right for you.

The Figment platform launched in 2019 and has been growing steadily ever since. Located in Canada, Figment supports staking cryptocurrencies such as Cosmos (ATOM), Terra (LUNA), and Algorand (ALGO). You’ll get 24/7 customer support through email and Telegram. Plus, users can view staking data in real time while calculating rewards.

Located in France, Stake Capital offers services such as arbitrage, lending, swapping, and borrowing, in addition to its Staking-as-a-Service feature. Stake Capital supports Kava (KAVA), Tezos (XTZ), Cosmos (ATOM), and many other coins. Fees charged on the Stake Capital site range from 0% to 10%.

Stakewith.us powers Unagii, an excellent platform if you are the type of person who prefers to go the self-service route. The platform offers a clean and simple interface, so you’ll have no trouble staking your preferred digital assets. These include Kyber Network (KNC), Skale Network (SKL), Cosmos (ATOM), Terra (LUNA), Kava (KAVA), Band (BAND), and many others.

Staking can seem intimidating, but once you have a solid understanding of how it works, it's a great way to make your digital assets work for you. Staking coins is an excellent way to create passive income so you make money at all hours of the day — even while you're sleeping.

As with all crypto, remember to invest only what you can afford to lose. Do your research and stake wisely!

We're a distributed team of dedicated strategists and engineers with a mission to redefine the digital asset yield experience.